A league allows a group of golfers to compete and be ranked against each other. It allows for a more intimate comparison against other league members, rather than the golf community at large. 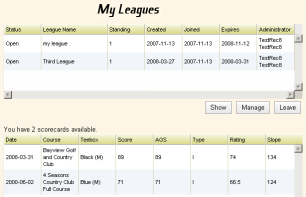 Leagues have a start and end date during which time a league member can submit a scorecard. Each game is assigned points based on the rule in effect for that league. A member's standing within a league is based on the number of points they accumulate.


Golfers can belong to multiple leagues and may submit the same scorecard to different leagues. Leagues are managed by a single individual. This administrator is responsible for creating the league, inviting other golfers to participate, removing members, setting the league cutoff date and selecting the rule to play by.